My inability to cook anything more than rice and eggies-in-a-basket has been a running joke in my family since my brothers learned how to grill steak circa age eight.

I called it my feminist anti-domesticity clause. “I don’t cook because i don’t adhere to gender roles!” i’d stomp and snap. Meanwhile, all my self-prepared dinners consisted of frozen pizza or my tried-and-true favorite eggie snack.

So much for self-reliance.

I knew, in spite of my claim to anti-domesticity, that cooking is not inherently an anti-feminist thing. Obviously, all people have to eat. And i was growing older and pizza for dinner was getting to be repetitive and unhealthy. When i moved into my own flat for the first time on January 11th here in Edinburgh, i knew this was to be the semester of learning and growth abroad.

Fundamental to the growing pains? Learning how to make a balanced meal for myself.

It started slow, tortellinis cooked in slightly salted and oiled water. A few days in i was making sautéed spinach salad, and my first foray into baking chicken was an endeavor of it’s-still-pink-so-five-more-minutes? (For the record, it turned out pretty moist and edible and non-salmonella-filled). I then tried my father’s go-to: honey mustard chicken. A few rounds into those baked delights, i was feeling more assured of my own abilities.

The time had come. My friend Megan and i decided to undertake cooking what we Southern ladies missed the most: fried chicken.

Merlot is the most important part of any well-cooked meal.

It was a semi-disaster. We knew, vaguely, that it was best to soak the chicken in some kind of egg-or-butter wash before slathering it in flour and bread crumbs. I always hated how warm the milk was after my mom had kept it beside her while frying up her famous Second-Helpin’ recipe, so i figured milk went in there somewhere.

With a decidedly eff-it-we’ll-make-it-work attitude, we threw all the ingredients together in one bowl. Which turned into dough.

Half an hour of packing dough onto chicken legs ensued. Merlot was drunk. Potatoes began to boil. At last, dough dripping off those once-running legs, we threw our concoctions into a pan of oil and prayed to the Almighty Steal Magnolia that She would help us make our mothers proud.

Having no tongs, Megan expertly wielded chopsticks to flip the chicken over until, all but surrendered, we popped them into the microwave to ensure they were fully cooked.

In the pan floated the remains of our dough.

As we sat down to the table, we contemplated our creation. The mashed potatoes and corn, if nothing else, looked exquisite. Bravely, we took a bite of the chicken. Not bad, i thought. Not too bad at all, for making up the recipe on the fly. Sure, it was no Hannah’s Second-Helpin’ but it certainly was good enough for the bone to be licked clean. Megan and i exchanged smiles of victory. 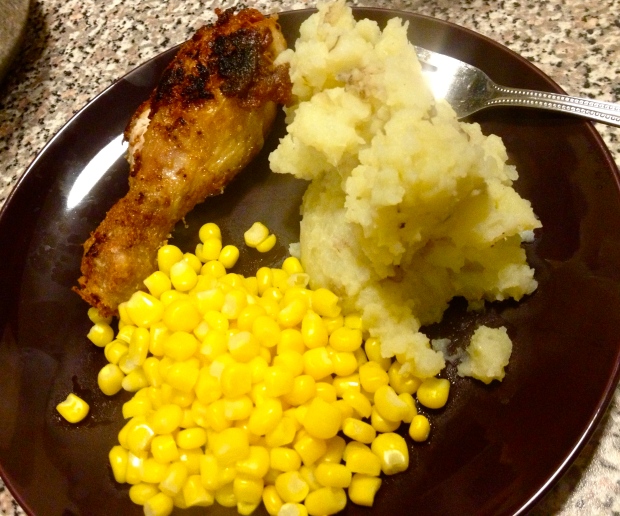 When i told J, the other fried-chicken-master-maker of my life, how our endeavor had gone i think he actually wiped tears from his eyes he chortled so much. My pride mildly wounded, i emailed my mother for her Most Secret Recipe for Hannah’s Second-Helpin’ Fried Chicken.

A Tesco trip later, i was armed for round two.

And this time, i must say, it went peach-pickin’ perfect. I’d had to improvise slightly, because Bisquik isn’t exactly available in Scotland (to my knowledge). But one sizzling pan later, i proffered the generously full plate to one of my flatmates, a hopeful grin tucked into the corner of my cheek.

“Daaaa-aaaamn!” she exclaimed. There was a pronounced diphthong in her reply, even with a mouth full of chicken. Paula Dean would be downright green in the face.

I’m not sure which was more satisfying: the fact that i’d finally made something worth craving (and not just edible) or the chicken itself. As delicious as the food in Amsterdam was, nothing really compares to the warmth of my Southern Mama’s cuisine.

I’m sure there are immeasurable numbers of my peers who scoff at my simple pride in learning how to balance a budget, much less cook a meal (again, my brothers could grill sirloins before middle school). But i think growing up sometimes can be so taken for granted it’s hard to remember a time when you didn’t know what you know now.

So i’m taking time to appreciate the learning, even if it involves clumps of should-have-done dough and try-harder-next-time chicken. Because nothing tastes so sweet as knowing my own capability, domesticity and all.