my wishes for peace go out to all of you on this day, commemorating a remarkable life led by dr. rev. king!

I thought when i went to meet the Green brothers in NYC on Tuesday, my week could have been made no better.

For some time now, i’ve been planning this megaroadtripofepicproportions which, to be totally fair, i have not been very communicative about in my assortment of social media outputs (reasons why i’d never actually be good at doing this professionally). Currently, i am in Vermont stuffed to the brim with apple crisp, turkey, and broccoli soaking in my last week of vacation at my friend Brenna’s beautiful abode. Of note about the preceding sentence? It accomplishes one of my fifteen tasks set forth to be completed before May of 2012: Road trip to VT. Eat Brenna’s cooking.

Such road-trippage has (mostly) been completed, but prior to arriving to zero-degree weather and more cats, i ticked off another teensy, tiny, miniscule thing on the aforementioned fifteen things list.

I saw a Broadway show.

And not just any show – as the title betrays, i saw the Broadway show: How to Succeed in Business Without Really Trying. Starring the brilliant, the beautiful, and the astronomically talented one and only Darren Criss.

I feel like telling you it was incredible would be somewhat redundant; the praise has been nothing but extraordinary, he has been so supremely well billed, and if you follow any kind of television or blog, you’ve probably heard how outrageously captivating Darren Criss is. And while i have had my beef with Glee before (and still do) i am one of those original fangirls who knew about Darren from his online musical role as Harry Potter in A Very Potter Musical (for which he also wrote the music). There’s a reason i’m never far from a package of RedVines or often found with a horcrux-finding medallion destroying Zefron posters.

Darren, who is so clearly at home on the stage, was a delight. His singing was superb and decidedly non-auto-tuned (a nice break from Glee’s unnecessary touch ups), his acting charming, and his stage presence perfection. More to the point, though, the entire cast of How to Succeed was a phenomenal crew of folks, blending together in their unique talents to a clearly synthesized vision.

Everything from the (delicious!) lighting design, choreography, costuming, and the stunning set sang of the exquisite direction and singular vision shared by all facets of the production members. The lady playing Rosemary had the most incredible, belty alto voice, and managed to communicate such convincing simultaneous longing and self-assurance that she was a force of her own to contend with. Beau Bridges as J.B. Bigley played to his strengths: acting, physical comedy, and minimal singing. The lad playing Bud Frump (my personal favorite character) was pitch-perfect; his singing was delectable, his impish, child-like temper hysterical, and his timing nothing short of the best of Broadway comedy. “Coffee Break” (my personal favorite from the show) was done exactly how i had always envisioned, and the rousing finale of “Brotherhood of Man” was better than the Tony Awards.

Seeing Darren was marvelous; seeing the show will be one never to be forgotten.

After the show, however, was a display of its own caliber; people were leaving the show before the closing number to go outside and wait to meet Darren by the stage door. Something of a considerable theatre snob, i already found this mildly appalling. Walking outside after curtain, however, my level of mild disapproval escalated to nothing less than a migling of sheer terror and slack-jawed awe at the zoo before us. People were climbing columns and trees so as to get a look at the stage door itself, and there were easily several hundred people clustered around the block hoping for a photograph. 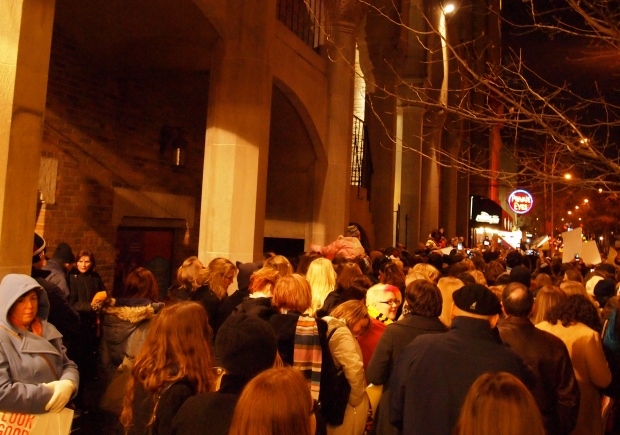 (a smidgen of the chaos. this was pre-tree-clim-age)

Granted, there was an incredibly friendly air to it all (plusss my brave friends did get me an awesome signed-by-Beau-Bridges Playbill), but it was more than a little ridiculous that there were people so desperate for a photo they were clambering up trees to get a better look. Leaving during bows to get a good spot is totally fine, but i just wish the crowd had been a little more controlled for as much the actors’ sakes as my camera-happy own. Darren, however, was apparently incredibly gracious and kind to everyone and the crowd internally was very friendly.  I myself did not stick around hoping for an autograph (i had spent the day in an existentially-fraught wander about Midtown and was pretty frozen by this point), but i am excessively glad my friends did.

brenna laughed at me while i attempted to take this very-artsy-photo. laughing was deserved. this took wayyy too long.

All in all, it was an exhilarating evening of exquisite theatre made all the more special by sharing it with my beautiful friends!

current jam: “can’t hug every cat” a song about cats. (really, you should click through and listen. this character would be my soulmate, were she real and not imagined. really.)

things i’ve done elsewhere: (this is a new end-of-post statement. in a trial period. kind of like wheezywaiter’s explosion wednesdays) a video review of maureen johnson’s new book; a video about doctor who; been on google+

7 thoughts on “How to Succeed in Business Without Really Trying”